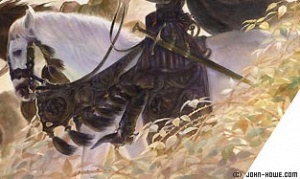 Malta was Lord Golden's horse. She is a white mare bought from Shoaks and obviously named after Malta Vestrit. When Lord Golden departed to the Out Islands he made sure that Malta would be send to Burrich. One of Burrich's last orders was that Ruddy, instead of Brusque, is to stud Malta.