Realm of the Elderlings 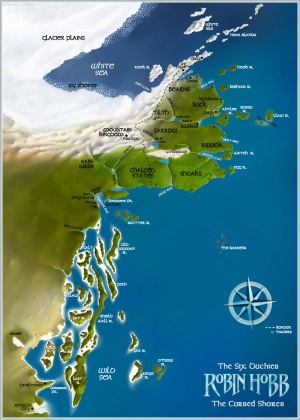 Map of the Six Duchies and Cursed Shores, based on those found in the Farseer, Liveship Traders and Tawny Man trilogies. Created by Crooty.

The Realm of the Elderlings, also known as the World of Eda and El, is the universe where most of Robin Hobb's books take place. The area reaches from the Out Islands in the far north to beyond far south past the edges of every map Verity ever studied, and includes the Six Duchies, the Mountain Kingdom, the Cursed Shores, the Rain Wilds, Chalced, Jamaillia and Clerres. It is implied that the world is round like ours.

The name "Realm of the Elderlings" isn't used by the characters within that universe, but is a descriptive title that first appeared in print around the time the Legends 2 anthology with the story Homecoming was published.

Chronological order of the Realm of the Elderlings series

The chronological order of the main novels is the same as the publishing order:

It is generally recommend to read the series in the chronological order if at all possible. Even though these stories happen in different parts of the Elderlings world and have different point of view characters, there are major plot lines that are interconnected and some characters that travel far and wide. The further you go along the series, the more important this becomes, especially if one wants to avoid spoilers.

Chronological order of all the RotE stories

Besides the main series, there are also several shorter works set in the same world. The following is more or less the chronological order of all the Realm of the Elderlings stories. It is not necessary to read everything in this order. While the shorter works do not contain big spoilers for the main series, they do feature some elements of history and magic typical of the area they are set in. Homecoming and The Willful Princess and the Piebald Prince in particular are sort of "origin stories", so it is up to the reader to decide whether to read them before or after the main novels. Words Like Coins and Blue Boots are set during the time of Assassin's Apprentice / Royal Assassin [1], as is Her Father's Sword.