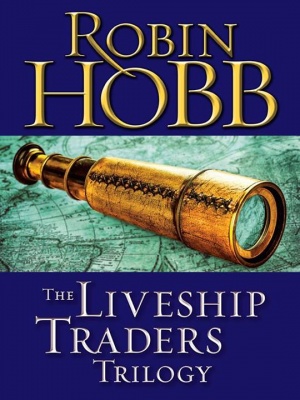 Cover for the Liveship Traders trilogy bundled for Kindle.

The Liveship Traders trilogy is set in the Realm of the Elderlings and chronologically follows after the Farseer trilogy. The main story line then continues in the Tawny Man trilogy.

The events of the trilogy take place in Bingtown and along the Cursed Shores far down south from the Six Duchies. The story is told from the points of view of numerous characters, most prominently the sea serpents, several members of the Old Trader family Vestrits and the pirate Kennit.

The short stories Homecoming and The Inheritance are both chronologically set in time before the trilogy but are not prerequisite reading.

Robin on the concept of liveships:

Liveship, Hobb says now, came to her at least in part through "living with a sailor," as well as spending many summers on board throughout their marriage. "All the ships that he's been on over the years have had different personalities and different ways of affecting their crew. And he's been on some ships that were absolutely wonderful, and some that were really frightening ships." It wasn't a big leap, says Robin, to thinking of a ship, "being actually alive and having its own personality. I think that it's a fairly old concept. When you look back and you see the figureheads, you see that there's always been the concept there that it's made of wood but it has a life of its own."[1]

Robin on the sea serpents:

I'm having a fun time with them. I like biological justifications. If I'm going to do it, it has to read true. It's always kind of fun to say, 'Hey: if you had this animal or this other species, how would it have evolved?' Creating an animal is more than just... you can't just take a cat and put wings on it." [2]

For cover art of special editions, audiobooks and translations, see the the article page of each title.

Original US covers (hardcover and paperback)