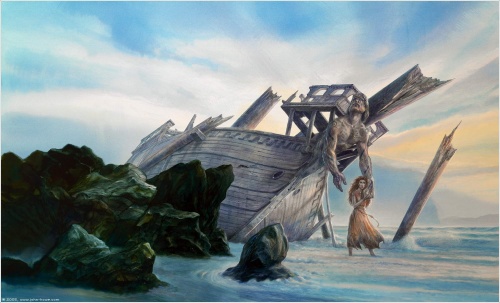 Paragon was the liveship of the Ludluck family. Paragon was build of two different wizardwood cocoons, resulting in an ongoing battle between the two dragons within himself. Paragon referred to them as the Greater and the Lesser. He quickened too soon, and had not absorbed enough human memories to be strongly centered in them, so his identity was shattered from the beginning.

Paragon has brown hair and a beard. His bare chest is muscled and has brown hair on it, as well as a large scar that resembles a seven pointed star. His arms are heavily muscled giving him the appearance of a warrior. Three large masts are on his decks.

Paragon's figurehead was later re-carved by Amber into that of a man strongly resembling Fitz. Amber also crafted Paragon an axe and engraved a charging buck on the handle, which tightens the link to Fitz as he was suited to using an axe in battle and the charging buck is the symbol given to Fitz by Verity. Amber also built a door into the floor of the captains cabin, much to the dismay of Brashen Trell and Althea Vestrit.